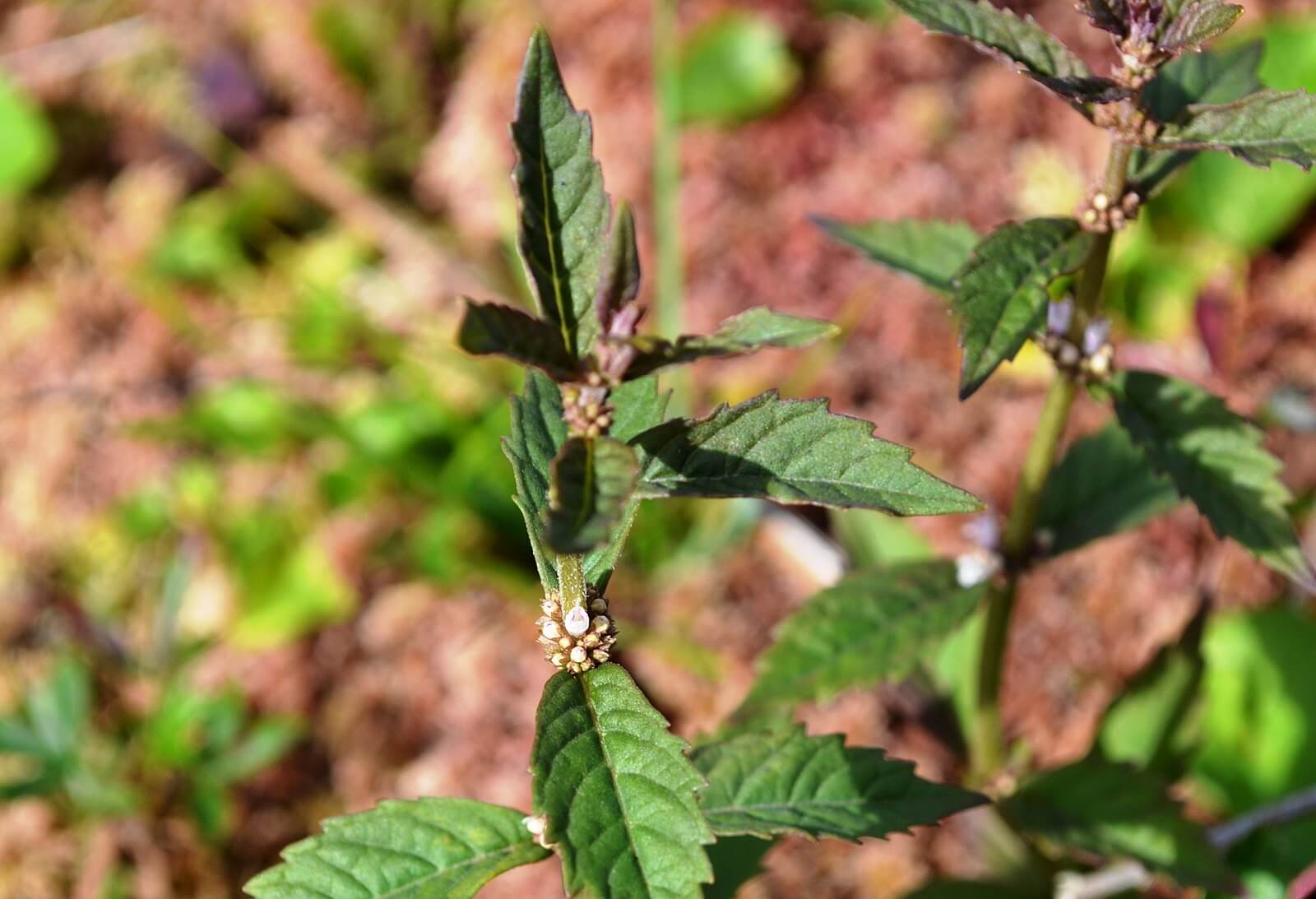 Bugleweed (Lycopus spp.), is a genus of plants within the mint and nettle family Lamiaceae. The family contains just over 20 species throughout the world, with the majority of members native to the US. Other common names for plants in this genus include water horehound and gypsywort.

Three of the most prolific species in the United States are Virginia water horehound (Lycopus virginicus), Northern bugleweed (Lycopus uniflorus) and American bugleweed (Lycopus americanus). All are found throughout most of America, with particularly dense concentrations in the North and Eastern states.

You’ll usually find bugleweeds growing in particularly damp and moist soils, from bogs to riverbanks. Wetlands are home to a number of bugleweeds that are now considered endangered. This is largely in part due to habitat destruction and loss of wetlands themselves. Sessile-leaved bugleweed (Lycopus amplectens), is currently listed as endangered in Indiana and Maryland.

A medium sized plant, bugleweed will usually reach no higher than 60cm. The stem has a square shape, and bears long, toothed leaves that are opposite. They begin deep purple in color and turn green as they unfurl. Their small white flowers bloom throughout the summer, finally developing into fruits as the fall sets in.

Edible parts and other uses

The roots, tubers and very young shoots of bugleweed are edible. The leaves have a faint mint like smell, but are generally quite bitter when eaten, so are not commonly foraged. They could be used as a potherb within salads, but cooking into a hot dish is best, to remove the bitter taste.

The roots and tubers can be boiled or roasted, and some individuals have compared the flavor to artichokes. The tubers are not usually very bulky, so the yield when harvested is not very substantial.

The tubers of bugleweed were commonly eaten by North American groups as a source of food and medicine. The Chippewa and Okanagon people would eat the roots of rough bugleweed (Lycopus asper) and Northern bugleweed. Eaten raw, boiled, baked or dried and stored, the roots were an important staple food for the Okanagon people.

Within herbal medicine bugleweed is thought to treat conditions relating to the thyroid, particularly Graves’ disease. It was also used to treat anxiety, and those with abnormally fast heart rates or high stress. Modern scientific studies are yet to conclude a true benefit from the use of bugleweed.

If you have a poorly functioning thyroid you should avoid bugleweed. It contains compounds which could inhibit its ability to function properly. As with any herbal remedy, you must contact your doctor before attempting to treat any condition with wild herbs.

Due to its ability to alter the functioning of the thyroid, pregnant women should also avoid bugleweed as it could possibly affect hormone levels.

As a wild food with relatively low studies conducted on its edibility, bugleweed should be consumed in moderation.

The best place to forage for bugleweed is along riverbanks, streams and lakes, this saves you wading amongst marshland and wetland, and also potentially disturbing endangered species.

Use a fork to gently unearth the soil around the base of the plant to expose the roots and tubers. The roots may dry out quickly, so keep them concealed away from sunlight in an airtight container until you can prepare or store them at home.

A plant with an interesting history of herbal remedy and culinary use. Bugleweed is still looked to today by many people seeking an alternative medicine. Often over-looked as a wild edible, bugleweed held an important place as a source of food in the diet of many Native American groups.

This Post was originally published on eattheplanet.org
Advice From The Clinic