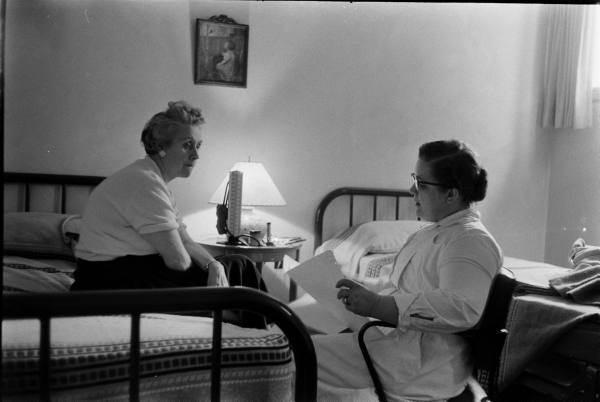 by Kenny Ausubel, author of When Healing Becomes a Crime: The Amazing Story of the Hoxsey Cancer Clinics and the Return of Alternative Therapies

In 1840 Illinois horse farmer John Hoxsey found his prize stallion with a malignant tumor on its right hock. As a Quaker, he couldn’t bear shooting the animal, so he put it out to pasture to die peacefully. Three weeks later, he noticed the tumor stabilizing, and observed the animal browsing knee-deep in a corner of the pasture with a profusion of weeds, eating plants not part of its normal diet.

Within three months the tumor dried up and began to separate from the healthy tissue. The farmer retreated to the barn, where he began to experiment with these herbs revealed to him by “horse sense.” He devised three formulas: an internal tonic, an herbal-mineral red paste, and a mineral-based yellow powder for external use. Within a year the horse was well, and the veterinarian became locally famous for treating animals with cancer.

The farmer’s grandson John C. Hoxsey, a veterinarian in southern Illinois, was the first to try the remedies on people, and claimed positive results. His son Harry showed an early interest and began working with him at the age of eight. When John suffered an untimely accident, he bequeathed the formulas to the fifteen-year-old boy with a charge to treat poor people for free, and to minister to all races, creeds, and religions without prejudice.

He asked that the treatment carry the Hoxsey name. Finally, he warned the boy against the “High Priests of Medicine” who would fight him tooth-and-nail because he was taking money out of their pockets.

Hoxsey planned to go to medical school to bring the treatment to the world, but soon found he had been blackballed after secretly treating several terminal patients who pled for their lives. With a local banker backing him, he founded the first Hoxsey Cancer Clinic in 1924, championed by the chamber of commerce and high school marching bands on Main Street.

As early word of his reputed successes spread, Hoxsey was invited to nearby Chicago, headquarters of the newly powerful AMA, to demonstrate the treatment. Grisly and indisputable photographic proof of the terminal case Hoxsey treated verifies that the patient recovered, living on for twelve years, cancer-free.

Hoxsey then claimed that a high AMA official offered him a contract for the rights to the formulas. The alleged agreement assigned the property rights to a consortium of doctors including Dr. Morris Fishbein, the AMA chief and editor of the JAMA. Hoxsey himself would be required to cease any further practice, to be awarded a small percentage of profits after ten years if the treatment panned out.

Invoking his Quaker father’s deathbed charge that poor people be treated for free and that the treatment carry the family name, Hoxsey said the official threatened to hound him out of business unless he acquiesced.

Whatever may have happened, that’s when the battle started.

The AMA first denied the entire incident, then later acknowledged the patient’s remission, though crediting it to prior treatments by surgery and radiation.

Yet one thing was certain: Hoxsey had made a very powerful enemy. By crossing swords with Fishbein, he alienated the most powerful figure in medicine. The AMA promptly dubbed him the worst cancer quack of the century, and he would be arrested more times than any other person in medical history.

As late as 1900, medicine was therapeutically pluralistic and financially unprofitable.

Doctors had the highest suicide rate of any profession owing to their extreme poverty and low social standing.

What radically tipped the balance of power was an arranged marriage between big business and organized medicine.

Under Fishbein’s direction, the AMA sailed into a golden harbor of prosperity fueled by surgery, radiation, drugs, and a sprawling high-tech hospital system.

The corporatization of medicine throttled diversity. The code word for competition was quackery.

It was easy for the medical profession to paint Hoxsey as a quack: he fit the image perfectly.

Brandishing his famed tonic bottle, the ex-coal miner arrived straight from central casting as the stereotype of the snake-oil salesman.

When the AMA coerced the pathologist who performed Hoxsey’s biopsies to cease and desist, Hoxsey could no longer verify the validity of his reputed successes.

Organized medicine quickly adopted the stance that his alleged “cures” fell into three categories: those who never had cancer in the first place; those who were cured by prior radiation and surgery; and those who died.

In exasperation, Hoxsey attempted an end run by approaching the National Cancer Institute.

In close collaboration with the AMA, the federal agency refused his application for a test because his medical records did not include all the biopsies.

Meanwhile Hoxsey struck oil in Texas and used his riches to promote his burgeoning clinic and finance his court battles.

Piqued at Hoxsey’s rise, Fishbein struck back in the public media, penning an inflammatory article in the Hearst Sunday papers entitled “Blood Money,” in a classic example of purple prose and yellow journalism.

In two consecutive trials, Hoxsey beat Fishbein, standing as the first person labeled a “quack” to defeat the AMA in court.

During the trials, Hoxsey’s lawyers revealed that Fishbein had failed anatomy in medical school, never completed his internship, and never practiced a day of medicine in his entire career.

By now Fishbein was mired in multiple scandals, including his effective but unpopular obstruction of national health insurance at a time when doctors had become the richest professionals in the country and the Journal the most profitable publication in the world.

Drug ads powered JAMA, but its biggest single advertiser in the 1940s was Phillip Morris.

(Camel cigarettes had the largest booth at the AMA’s 1948 convention, boasting in its ads that “More doctors smoke Camels than any other cigarette.”)

Enmeshed in controversy, Fishbein’s stock was trading low, and, shortly after his first loss to Hoxsey, the AMA chief was deposed in a humiliating spectacle.

But ironically Hoxsey’s stunning dark-horse victory against the “most terrifying trade organization on Earth” only ended up bringing the house down.

He immediately faced a decade-long “quackdown” by the FDA.

By the 1950s, Hoxsey was riding what was arguably the largest alternative-medicine movement in American history.

Congressmen, judges, and even some doctors ardently supported his quest for an investigation.

Two federal courts upheld the therapeutic value of the treatment.

Even his archenemies, the American Medical Association and the Food and Drug Administration, admitted that the therapy does cure certain forms of cancer.

JAMA itself had published the research of a respected physician who got results superior to surgery using a red paste identical to Hoxsey’s for skin cancers including lethal melanoma, a skin cancer that also spreads internally.

Medical authorities escalated their quackdown in the McCarthyite wake of the 1950s.

On the heels of a California law criminalizing all cancer treatments except surgery, radiation, and chemotherapy, the federal government finally outlawed Hoxsey entirely in the United States in 1960 on questionable technicalities.

Chief nurse Mildred Nelson took the clinic to Tijuana in 1963, abandoning any hope of operating in the United States.

It was the first alternative clinic to set up shop south of the border.

Mildred quietly treated another 30,000 patients there until her death in 1999.

Like Hoxsey, she claimed a high success rate, but her contention is unverifiable since the treatment has yet to be rigorously tested.

He maintained that the Dallas doctors used his clinic as a “dumping ground” for hopeless cases, and that the great majority of patients he got were terminal, having already had the limit of surgery and radiation.

He said he cured about 25 percent of those. Of virgin cases with no prior treatment, he claimed an 80 percent success rate.

Seventy-five years after Hoxsey began, why do we still not know the validity of his claims?