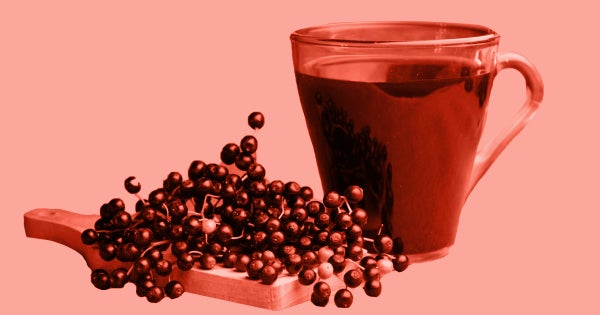 With cold and flu season always just around the corner, you’ll take all the necessary precautions: get your family the flu shot, stay hydrated, order the kids back to the sink to scrub those grubby hands with soap, and stock up on… elderberry syrup? While there’s ample scientific evidence for the rest of these precautions (go on, get your flu vaccine), the cult of elderberry syrup benefits  is based more on fringe enthusiasm for a few cherry-picked studies. Is it all that it’s cracked — the sickness-preventing panacea you read about on an elderberry fan club Facebook group? No, of course not. So where does the truth lie? As always, in science.

Derived from the berries of European black elder trees, the elderberry has been used to fight upper-respiratory infections for centuries. And, as it turns out, elderberry benefits do have some solid science behind them. They’ve mostly been small studies, but they include a few high-quality, placebo-controlled human trials, the kind that is required for pharmaceuticals but rarely conducted for supplements. The research shows great promise in taking it at the onset of symptoms may lessen their severity and help you feel better faster. The caveat: It does not support taking daily spoonfuls of elderberry syrup to prevent colds and flu.

For example, in a 2004 study, researchers recruited 64 people who’d been experiencing flulike symptoms for 48 hours or less. For the next five days, the participants took 15 milliliters of either elderberry syrup or a placebo syrup four times a day, without knowing which one they’d been given. On average, those who took elderberry saw their symptoms clear up four days sooner than the people given the dummy syrup.

In another study published in 2016, Australian researchers showed that taking elderberry before an overseas flight may protect against the cold viruses that can wreak havoc in a plane’s tight quarters and stagnant air. Over the course of 20 months, they gave 312 international air travelers either 600 to 900 milligrams of elderberry extract capsules or a placebo starting 10 days before their trip. The participants kept taking elderberry (or the placebo) until four or five days after they returned home, and they tracked any cold symptoms they experienced during or after their trip. Sure enough, more people in the placebo group got sick, and they reported harsher and longer-lasting cold symptoms than those who’d taken elderberry extract.

At the New Mexico Herbal Clinic, we create our own special blend of 100 percent organic certified Elderberry Syrup.

Why not get that initial consultation today and start enjoying all the health benefits of herbs that we can blend just for you!

So how does elderberry work? As is the case with most herbs, the exact mechanisms haven’t been observed in human trials, but laboratory studies offer a few clues. Some research suggests elderberry may increase the production of specific cytokines, chemicals that tell the immune system to rev up and fight off an infection. Elderberries are also chockfull of antioxidants such as vitamin A and C and various flavonoids — botanical compounds that protect cells from oxidative damage — which may help keep colds and flus under control.

“Elderberry is antiviral as well,” Todorov says. “It loosens mucus, making it easier to cough and preventing [an upper-respiratory virus] from turning into pneumonia or bronchitis.”