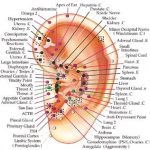 Auriculotherapy is defined as a Healthcare modality in which the external surface of the ear, or auricle, is stimulated to alleviate pathological conditions in other parts of the body. While originally based upon the ancient Chinese practice of Acupuncture, the correspondence of specific parts of the body to specific points on the ear, was first developed in modern France.

Auriculotherapy is a safe, painless, noninvasive and non-Toxic procedure, performed through stimulation through the cranial nerves and spinal nerves on the auricle (external ear). This stimulation results in neurotransmitters being stimulated within the Brain and Spinal Cord of the Central Nervous System. This stimulation of neurotransmitters modulates the pain and modulates nerve function, thereby stimulating the healing process within the body to that organ or body part that is affected.

At the New Mexico Herbal Clinic, we use ear seeds to perform Auriculotherapy.

Auriculotherapy gets its name from the auricle, which is the anatomical name for the external ear.  Auriculotherapy techniques use special locations or points on the skin of the ear to diagnose and treat pain and medical conditions of the body.  This method is used worldwide by 10’s of thousands of practitioners to bring effective relief to a wide variety of conditions including pain, dysfunctions, injuries, addictions and internal disorders.

Auriculotherapy has been used as a form of Healthcare for thousands of years all over the world. Ancient records from China, Egypt, Greece, Rome and Persia all indicate treatments applied to the ear for a variety of problems.

Modern Auriculotherapy got its start in the early 1950’s when a French neurologist named Dr. Nogier who spent his career researching and developing the map of reflex points on the ear, based on the concept of inverted body (fetus) arrangement of the ear.  The head areas are represented toward the bottom of the ear, the feet towards the top and the body in between.  He eventually discovered over 200 Auricular points and their corresponding effects.

Today, Auriculotherapy research continues with major advancements in the study and placement of ear reflex points, as well as scientific documentation of this technique’s effectiveness.  Auriculotherapy is now accepted worldwide as a valuable and effective procedure for many conditions.

As research has uncovered information about this amazing therapy, certain interesting facts have emerged.  For example, stimulation of certain points on the ear, can change the cardiac pulse within a few seconds.  Auriculotherapy tends to not only eliminate pain, but also tends to stimulate healing of the effected body part.  It’s possible to locate problems in the body with up to 75% accuracy, merely by examining the ear.

Auriculotherapy is a natural complement to many types of health care including Acupuncture, Chiropractic, Western medicine, Homeopathy, Naturopathy, Physical Therapy and even Psychotherapy.

Auriculotherapy has proven to be effective in many medical conditions, both Physical and Mental, and any body part can be remotely treated from the ear.

Some of the most successful uses of Auriculotherapy include the areas of addiction, pain management, mental health, musculoskeletal injuries and internal disorders.  Though it has been successfully applied to nearly any problem imaginable, published protocols are available for several hundred specific problems.

Auriculotherapy treatment will begin with your practitioner’s examination of one or both of the ears.  Examination techniques include probing for tender areas, or testing with an electronic devise.  Specific charts of common points related to specific conditions will also likely be consulted and compared to your exam findings.  Once the reflex points applicable to your specific condition are identified, treatment will begin.

Regardless of the treatment technique used, Auriculotherapy is extremely safe, painless, noninvasive and natural.  The only known side effects, if they can be called side effects, are all positive and include enhanced mood, better sleep and even decreases in non-related symptoms.

Auriculotherapy treatments often take effects within a few minutes or even seconds, and may be effective for days, weeks or longer.  Some conditions may respond to only one treatment, while others may require multiple treatments.

Your practitioner may also attach or tape beads or tacks to your ear, to provide continuous stimulation over the course of several days.  If so, you’d be given specific directions on how to use these items and when to remove them.